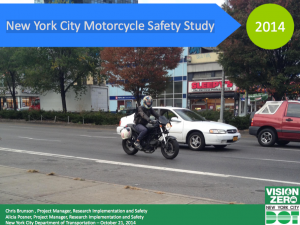 In 2014, the NYMSTF was invited by the NYC DOT to “give input” on a motorcycle safety study. We were very excited to do so, and attended a small meeting in January at 55 Water street.

We were excited about this meeting because, to the best of our knowledge, New York City Department of Transportation had never conducted any motorcycle study – about safety, or anything else.

We were told we couldn’t get a copy of the study. We were told it was a “draft” and that the final report would be published “soon.” A year passed, and (despite numerous inquiries) we heard nothing, and no report emerged.

Our patience was finally exhausted, so we began the process of submitting a FOIL request to the city of New York. It took some time, but eventually we got hold of the draft report, and the underlying data. Those raw files are attached, below.

Everybody is encouraged to download and read these files. The report contains some good, and some bad. But, it contains a better, fact-based look at motorcyclists in NYC, than what has existed in the public eye previously.

We don’t understand why NYC DOT never published this report. The most charitable reason we can imagine is this: NYC DOT doesn’t ever think about motorcyclists. We don’t rate the paper to print the report, or the time to tweet out a link.

Unless a gang of bikers is blocking off traffic and pulling citizens from their cars, New York City officials don’t care about us. That is a sad, sad statement – and a major contributory reason for bad motorcycle behavior. If NYC wants more law abiding riders, law-abiding ridership need to be rewarded and encouraged.